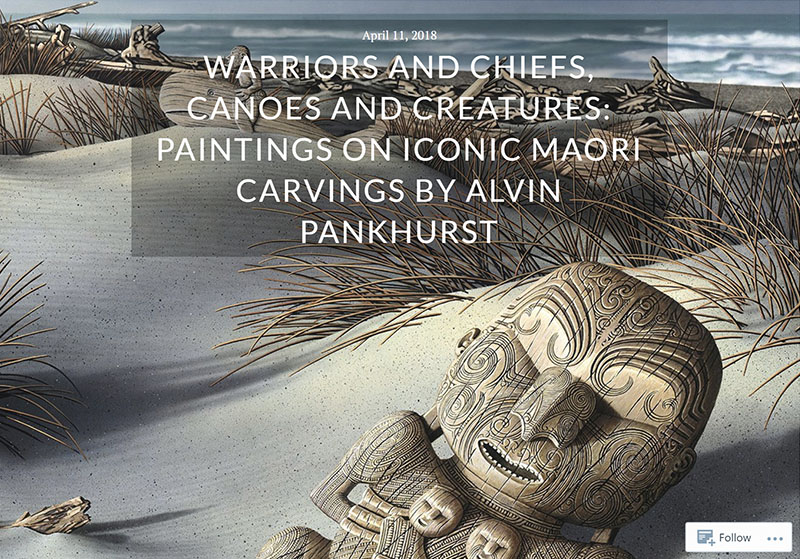 I’m glad I discovered the work of Alvin Pankhurst (born 1949), a New Zealand realist-surrealist painter with two successful galleries, in Parnell (Auckland) and Pauanui (the Coromandel). Alvin, who studied at the Wellington Polytechnic School of Graphic Design, is an internationally recognised leader in Maori subjects. His early paintings showed the passing of time with roots growing from wild roses, in Victorian interiors. Now the art he makes is steeped in legends and history, presenting Maori artifacts across stunning seashores and lakes.

Alvin writes: “I grew up around the Wairau pa along the banks of the Wairau river, 10 km north of Blenheim. I loved carving as a kid but the spirituality that the Maori master carvers were able to achieve makes your hair stand on end. We can’t ever let the Maori culture and history be lost, so all I can do is try to paint how I feel about the beauty and importance of New Zealand’s native people. That is why I have titles such as ABOUT TIME, OUR TIME, IT’S ABOUT TIME, SPIRITUAL JOURNEY, GUIDING SPIRITS, etc. The Maori culture is the only thing that makes us different from any other country, and it must be held up for everyone to see and for nobody to forget.”

The artist continues on his themes: “I married Ephra in 1975 and found during our overseas adventures that all anyone knew about art in New Zealand was the Maori art with their beautiful carvings, wakas, marae, weaving and songs! And of course the mokos/tattoos and hakas. In 1976, we moved to Auckland and started a series about the early European settlers’ hazardous journey to New Zealand. Over 150 ships were wrecked, most people were saved but there must have been a lot of furniture washed up on the shore. The furniture and crockery made beautiful paintings. I was always reading and hearing stories about amazing Maori treasures being exposed by coastal erosion or by the draining of wetlands.

“When under threat of attack from other tribes the Maori buried their treasures in sand pits or hid them in caves. Their waka were camouflaged with reeds under water in the rivers. My paintings of the great Maori warriors and chiefs, and of war wakas, fishing wakas and taniwha are of carvings by great Maori carvers over the last three to four centuries. The paintings of the iconic Maori carvings reflect the feeling of spirituality, peace, tranquillity and history.”

Alvin has won several awards over the years, including the Air New Zealand National Art Award and Benson and Hedges. In 2001, he became the first New Zealander living in New Zealand to secure a place at the Royal Academy of Arts Summer Exhibition in London. His business is managed by his wife Ephra. They have two sons, Matthew (LLB BA) who works in the galleries, and Andre who is married to Anna and works for Gaudy in Sweden. Andre, a goldsmith/jeweller, makes jewellery for eminent European families.

An important event in Alvin’s life and career occurred while he was still in college. “When I was 19 and completing my Honours in Wellington,” he says, “my bed-sit studio was burnt down, destroying all of my art. It was a result of a combination of oils, solvents, a heater and attempted murder between two visitors to my studio. Severely burnt, the experience dramatically altered my view of paintings and I decided to concentrate on quality not quantity.”

PUBLISHED BY TULIKA B. 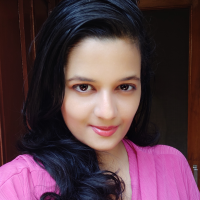 Cosmopolitan soul and King’s College London alum (Twitter: @TulikaBahadur89) – slowly working on a novel and a collection of short stories (tulikabahadur@gmail.com: email for reviews and interviews). Follow “On Art and Aesthetics” on Facebook (@onartandaesthetics) and Twitter (@OnArtAes).
View all posts by Tulika B.

This entry was posted in Publications.
Translate »